Warning: Parameter 2 to qtranxf_postsFilter() expected to be a reference, value given in /home/customer/www/apparelnetwork.it/public_html/wp-includes/class-wp-hook.php on line 307
 Stan Smiths: History and Reinventions | Apparel Network

Originally developed as a tennis shoe for professionals, the Stan Smith is now one of the most instantly recognizable sneakers worn on the street today. Since 1971, it’s been one of Adidas’ most famous and phenomenally popular shoe styles. In fact, the Stan Smith even appeared in the Guinness Book of World Records after Adidas sold twenty-two million pairs back in 1988. 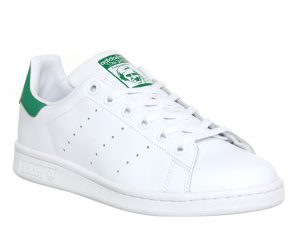 Believe it or not, the Stan Smith wasn’t actually called Stan Smith at the beginning. First released in 1963, it was actually called the Adidas Robert Haillet in honor of the French tennis player of the time. When Haillet retired, Adidas decided to set their sights on an even bigger tennis star and chose an American, Stan Smith (then ranked number one in the world), as the new namesake of their shoe. This branding strategy ultimately helped them cross over into the American market, broadening Adidas’ reach far beyond its European home base.

The Stan Smith is a low top sneaker usually made from white leather, with white shoelaces to match. Compared to other Adidas kicks, it doesn’t have the typical three stripes that you usually see. In their place are three perfectly aligned rows of small, circular ventilation holes. Adidas has tinkered with the shoe design from time to time over the years. Although the models on sale today typically closely resemble the original version, Stan Smiths shoes sold in the nineties came with Velcro instead of laces. Whatever the vintage, you can usually find an image of Stan Smith himself under the laces.

Although the original Stan Smith is an all-white sneaker originally designed for men, there are models for women and kids too. Some feature a splash of color like a green or navy heel. Versions with trendy solid colors like coral, linen green, and orange are available as are fun floral patterns, and there’s a slick triple black leather Stan Smith out there as well. All models, regardless of the color, sport the same elegant, simple design for which the shoe has become legendary.

While professional tennis players no longer wear the Stan Smith, as their shoes have technologically advanced since the Stan Smith was originally designed, you’ll see it on fashion icons like Gisele and Pharrell today. But its timeless appeal goes far beyond celebrities and tastemakers. People of all walks of life around the world continue to rock the Stan Smith with as much fascination and joy now as they did back when it first hit the scene in the 1970s and 1980s.