Warning: Parameter 2 to qtranxf_postsFilter() expected to be a reference, value given in /home/customer/www/apparelnetwork.it/public_html/wp-includes/class-wp-hook.php on line 303
 The Rise of Sneaker Culture | Apparel Network

We’ve written about the rise of sneaker culture and how the 80’s and 90’s saw its evolution into the permanent urban fashion staple it is today. Now the Brooklyn Museum has an exhibition (July 10 – October 4), “The Rise of Sneaker Culture,” which details this progression from the earliest fashion sneakers (and we mean earliest… see the picture featured on the left) to the most extravagant, rare, and — much to our surprise — thoughtful elements of what has become our modern sneaker culture.

Our visit taught us a couple of things about sneaker history, but also highlighted the fact that sneakers are the single item of apparel that bridges the gap between men and women’s fashion: 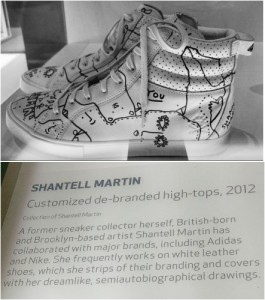 We were fascinated to see that sneakers can very literally be works of art as demonstrated by Shantell Martin, who uses white sneakers like a canvas upon which to tell a story (generally an autobiographical one).

We didn’t need a guided tour to know that a lot of sneaker designs are just plain cool, but we learned a lot about the artistry and inspiration behind many of the designs. For example, the Nike Pigeon Dunk SB designed by Jeff Staple was inspired by, yes, pigeons! Not just any pigeons — these babies were inspired by New York City pigeons, kings of the urban bird world. However, unlike New York City pigeons these shoes were particularly rare; only 30 pairs were stocked by NYC 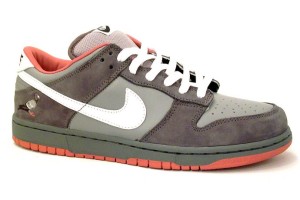 retailers, which, predictably, sparked a bit of a riot.

It’s hard to find a standout among the sneakers in this amazing exhibition. There were first generation Converse (which until recently looked exactly like modern day Converse); the track shoes worn by Jesse Owens at the 1936 Berlin Olympics (track shoes made by German manufacturer Adidas, and rather boldly offered to Owens for the occasion) where he singlehandedly helped disprove Hitler’s theory of the superiority of the Aryan race; the Adidas Micropacer which recorded distance, running pace, and caloric consumption via a microsensor in the left toe… no app required!

In our humble opinion, the Air Jordans were one the biggest highlights. After all, Air Jordans were among the first sneakers to spark the sneaker craze. To see all the models — from the very first Air Jordan to all its subsequent renditions — was like looking at 30 years of culture behind one single glass panel. It doesn’t really get cooler than that.