Warning: Parameter 2 to qtranxf_postsFilter() expected to be a reference, value given in /home/customer/www/apparelnetwork.it/public_html/wp-includes/class-wp-hook.php on line 292
 movies and streetwear | Apparel Network

Summer’s here  and with it, some exciting fashion trends. What are the hottest street looks people will be wearing over the next few months? Whether it’s old school tracksuits, fresh collaborations between streetwear designers and sportswear brands, or an endless variety of creative graphic tees, there’s something to inspire everyone. 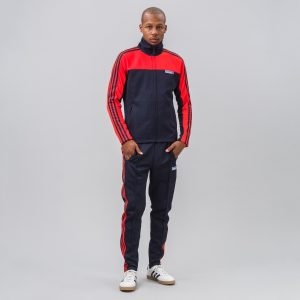 1990s throwback looks are still having a moment, and men’s streetwear from back then is a noticeable trend on the runways. Clean, minimalist tracksuits and tracksuit jackets from designers like Astrid Andersen and Nasir Mazhar, sometimes adorned with a logo patch, are just one example of how this iconic style is being reinterpreted as its popularity endures. Meanwhile, Adidas, whose legendary Stan Smith sneakers we recently covered here on the blog, is taking us back to where it all started with a re-release of another OG 1970s tracksuit in bright orange and navy.

Collaborations are also drawing attention, with Vetements leading the charge as it has pursued joint collections with no less than 18 other major brands including Juicy, Hanes, and Levi’s. Fashion observers will no doubt remember how Vetements’ collaboration with Juicy made a splash last summer in the form of luxe velour tracksuits and hoodies featuring the glittering Juicy logo that was all the rage in the early aughts. New collaborations between fashion houses and major sportswear brands have resulted in some great streetwear styles that look at times familiar yet consistently innovative, from Italy’s Fila teaming up with Gosha Rubchinsky on a classic logo hoodie to OFF-WHITE and Umbro joining forces on a punk-inspired streetwear line featuring patchwork looks made of gingham and pinstriped fabrics.

Of course, as the temperatures rise folks will no doubt be peeling off their outer garments for a little fresh air. What will they be wearing underneath? Chances are good that they’ll be sporting graphic tees. Here, too, retro looks are also in, although there’s a fine line between nostalgia and kitsch. Some brands, like Opening Ceremony, are offering simple, elegant tees in a trendy pastel pink hue featuring a single red rose. Others, like Rebuild by Needles, are going in entirely the opposite direction with bold statement tees assembled using a selection of vintage collegiate t-shirts to create a one-of-a-kind look. From simple to elaborate, there’s a graphic tee to fit every style and sensibility.

Are there any new trends you’re especially excited about this summer? If so, let us know! We’re always keeping a lookout for fresh, exciting new streetwear looks.

As part of our continuing series about movies that have left their mark on streetwear, we’re taking a closer look at the global phenomenon whose reach goes well beyond the silver screen: Star Wars.

Star Wars is a merchandising giant. You can get ANYTHING Star Wars: his and hers “Han and Leia” hand towels, R2-D2 screwdrivers, a lightsaber selfie stick (no, really). Like any self-respecting, marketable movie franchise, Star Wars also has a plethora of t-shirts and apparel to satisfy your need to be a part of a galaxy far, far away. Costumes from the original trilogy (Episodes IV, V, VI) had an impact on mainstream fashion and “The Force Awakens” is following in those footsteps, making a similar mark on the fashion world. 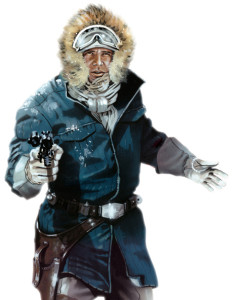 The most obvious homage to the Star Wars franchise came from Rodarte, whose 2014 collection featured the film’s imagery printed directly onto the fabric. Anyone need a Death Star or Tatooine double moon evening gown? Rag & Bone, along with other fashion giants like Diane von Furstenberg, designed an entire “Star Wars: The Force Awakens” inspired line for charity.

You can see Star Wars inspired fashion in everyday apparel if you look carefully. In our post about 2016 fashion trends we highlighted parkas, which have grown in popularity over the years. Star Wars certainly played a part in that. Remember planet Hoth and its freezing temperatures? Then you might also remember Han Solo donning a pretty sick, fur-lined parka (we’ve provided a picture to help refresh your memory).

And don’t forget the aforementioned t-shirts. Every printed t-shirt with Darth Vader, Luke, Han Solo and other Star Wars characters are in themselves an expression and a choice: the light side or dark side of the Force, the underdog versus the giant. Ultimately that’s what fashion — and especially streetwear – is all about: expressing your unique sense of self through your unique sense of style.

As we discussed in an earlier blog post, 80’s cinema did a lot to influence streetwear, but American films of the 1990s were equally impactful and arguably more culturally significant in determining the direction of urban wear trends for the decade.

Do the Right Thing 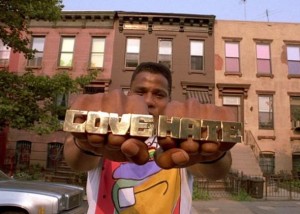 Set in the Brooklyn neighborhood of Bedford Stuyvesant (Bed-Stuy), Spike Lee’s pivotal film on race relations in New York City provided a realistic representation of rising racial tensions. Part of that realism is rendered through the costuming of the characters in the film.

Ruth E. Carter, the film’s costume designer, was told by Lee that the costuming should be bright… and she delivered. The film featured primary colored clothing, a lot of gold and a whole lot of Nike.  The iconic Radio Raheem (who is the symbolic embodiment of Black pride) sports a white T-shirt with a colorful boxed-off design bearing the phrase “Bed-Stuy or Die” emblazoned on the front. (On a side note, the t-shirt was actually designed and painted by a local Brooklyn woman.) Raheem also sports two gigantic, iconic, knuckleduster rings, “Love” and “Hate”.  Learn more about the representation of black culture and the costuming of the film. 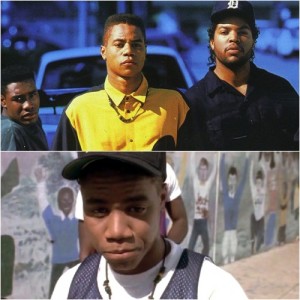 Director John Singleton’s “Boyz n the Hood” also addressed the issues facing black youth in a rough neighborhood, this time in the South Central Los Angeles. The style, although equally memorable, is a little different. The characters don plenty of funky, saturated colors, but what we remember best are the denim-wash jeans, chambray shirts, and a whole lot of snapbacks. In one scene, Cuba Gooding Jr. sports a basketball jersey over a white t-shirt — a classic look of the time. 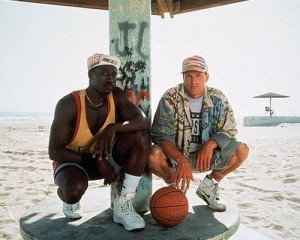 “White Men Can’t Jump” featured a plethora of colorful fashion… it does take place in Venice Beach, CA, one of America’s most colorful towns. Muscle tees and high top sneakers, the film gives us an accurate portrayal of the street ball culture that dominated the West Coast in the 1990s.  Wesley Snipes’s character, Sidney Dean, has a signature court style that consists of two muscle tees, bicycle shorts, a cycling cap and a gold chain. Woody Harrelson’s Buddy Hoyle establishes his own identifying style in his first game: tie-dye cap, a “Parental Advisory” tee with a colorful open button down worn over it. He basically looks like a chump… and that’s exactly what he wants you to think.

This is Part 2 in our series, Movies Make Their Mark on Streetwear. Didn’t read Part 1? Check it out now…. 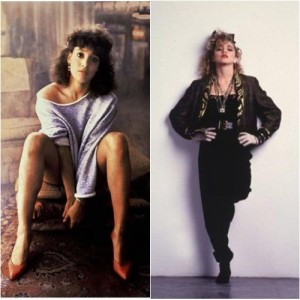 The 1980’s ushered in a number of films that majorly influenced women’s street wear. Remember sweatbands and leg warmers, and off-the-shoulder sweatshirts (which, incidentally, have made a comeback as of late)? Then you may be shocked (or not) to know that the sexy, slouchy look was inspired by Jennifer Beals’s character in 1983’s “Flashdance,” an iconic role that was especially influential in making a generation of young women cut up their oversized sweatshirts in an attempt to look healthy and athletic.

Meanwhile, Madonna set a funkier, but no less iconic, trend with the fashions she sported in 1985’s “Desperately Seeking Susan.” The look consisted mainly of layering and studs on everything, but it’s worth breaking it down a little further. Black leggings, oversized tops and blazers, bold neon colors and lots of mesh – the clothing is a cinematic extension of the style associated with Madonna’s 1984 album, “Like a Virgin” but with a little more leather, a little less sequins and lace. 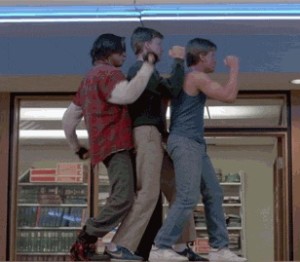 Men’s street wear also found inspiration during the 80’s. In fact, “The Breakfast Club,” has it almost completely covered. The film’s three male protagonists each represent a stereotype of the time, including their respective senses of fashion. Andrew (Emilio Estevez) is the jock, Brian (Anthony Michael Hall) is the geek, and Bender (Judd Nelson) is the rebel/”criminal.” Each one is appropriately dressed: Andrew wears a muscle vest, jeans and sneakers; whereas Brian wears a very plain shirt, chinos and plain sneakers (which today would be called “normcore”). Bender wears a biker jacket, plaid shirt, biker boots and earring. The film offered every American adolescent male a look to emulate.

While most of these styles were somewhat transient, a few films gave us some permanent fashion gems.

Next up: the influence of “White Men Can’t Jump”, “Do the Right Thing”, “Boyz in the Hood” on urban wear and street wear.

The link between street and urban wear and the music industry is well documented, enough so to say with certainty that the rise of hip-hop and urban wear were parallel. But we’d be remiss if we didn’t talk about the way movies have influenced street wear throughout the years.

This post is the first of a series that will examine how the American film industry has influenced street and urban wear throughout the years. Naturally, we’ve decided to start at “the beginning,” the tail end of the golden age of Hollywood: the 1950’s.

While Cary Grant, Gray Cooper, Audrey Hepburn and Elizabeth Taylor may have been the fashion icons of their times (not to mention Marilyn Monroe who influences fashion still today) they were also symbols of elegance and class. Their style — much like their fame — can be seen as the stuff dreams are made of and something to aspire to. Then James Dean came along and starred in one of the most iconic films of his time, “Rebel Without a Cause.” The film, which addresses the unrest of three California teenagers and their struggle to find their place in the world, continues to speak to teenagers today. 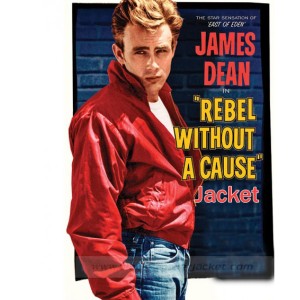 It’s no surprise that Dean’s style was also one of the first and greatest inspirations for modern streetwear designs. Dressing down, rather than up, became fashionable for the first time. Wearing jeans, a white t-shirt, and the iconic red blouson jacket that influenced other stars for generations, Dean defined a new kind of cool that the kids could relate to. The red jacket became the “must have” item in every young man’s wardrobe. Although it looked simple, the outfit was meticulously created by Warner Bros.’s head costume designer, Moss Mabry.

James Dean may have been perfect for the role of Jim Stark, but he was also the perfect vehicle for selling teenage fashion due to his own personal style being closer to the laid back, everyday streetwear trends of middle America rather than the glitzy glam of Hollywood.