Warning: Parameter 2 to qtranxf_postsFilter() expected to be a reference, value given in /home/customer/www/apparelnetwork.it/public_html/wp-includes/class-wp-hook.php on line 307
 Streetwear does Boots | Apparel Network

When you think of the word ‘streetwear,’ chances are you think of clothes: hoodies, graphic tees, sweatshirts, and puffer jackets, for example. And if footwear comes to mind, it’s probably sneakers. But there’s another key element of streetwear that may be flying under your radar: boots. Several notable streetwear designers are making this straightforward shoe an innovative and dynamic part of their collections. As a result, there are a lot of different ways to rock streetwear-inspired boots according to your personal style—from stern to sexy, playful to understated.

Timberland boots have had a huge influence on street fashion. These rugged, masculine kicks, originally designed for New England construction workers, have been an integral part of streetwear and hip-hop fashion for a long time. But Timberlands have evolved beyond the standard issue nubuck boot, first popping up in vivid hues (even pink!) and more recently appearing in neutral tones in a collaboration line with Ronnie Fieg. Timberland has teamed up with a lot of streetwear designers in recent years, in fact—Supreme, Black Scale, Billionaire Boys Club, and Stussy are but a few. 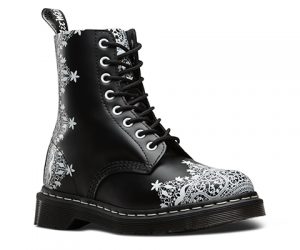 Military-inspired looks are also well represented in streetwear today. Doc Martens is an iconic example of street style, conveying a nonconformist viewpoint popular with rebels of all stripes. Known for chunky and heavy footwear, Docs now feature Lite models that retain the original Doc Martens design while offering a more lightweight, user-friendly feel. Both men and women can choose from tasteful black, turquoise and cherry tones. But there are also eye-catching decorative patterns such as this Victorian lace-inspired black boot that mixes feminine and masculine themes to create a visually arresting goth look. People inclined toward a more playful style can choose from imaginative cartoon-inspired designs too.

Boots can create a dramatic, sexy look as well. As we mentioned in our fall streetwear fashion preview last month, Kanye West’s new Yeezy Season 4 collection prominently features futuristic clear plastic thigh-high boots, and Misbv goes in a similar direction with semi-opaque PVC pants revealing a black bikini and calf-high boots beneath. Meanwhile, Rihanna, who’s been known to step out in Misbv attire, offers a feminine twist on sporty boots such as high heel leather sneakers and sneaker boots with a chunky wedge in her FENTY x PUMA collection.

Boots are an endlessly flexible and fun way to create, enhance, or even heighten a particular outfit or ensemble that might otherwise lack a final finishing piece. There’s a boot for every state of mind and way of being, and streetwear designers are having a great time exploring the incredible variety of options at their fingertips. With streetwear’s influence on fashion increasing by the year, this trend is likely to go in even more creative directions in the future.