Warning: Parameter 2 to qtranxf_postsFilter() expected to be a reference, value given in /home/appareln/public_html/wp-includes/class-wp-hook.php on line 288
 Red Carpet Streetwear | Apparel Network

There’s nothing quite like the glamour of the red carpet. During awards season, it’s where you’ll find some of the most elegant fashion. However, since celebs typically glide across the red carpet in shimmering satin gowns and sleek tuxedos at major entertainment industry events like the Golden Globes and the Grammys, you might not expect to find many of them rocking streetwear. There is another way to “dress to the nines,” though, and it has a fresh street sensibility. And you can find some innovative examples of it on the red carpet. 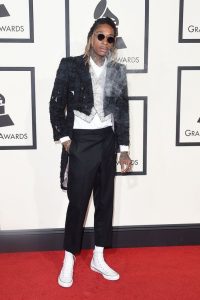 Not surprisingly, streetwear more often tends to make an appearance at the Grammys, which are devoted to music. Rapper Wiz Khalifa is one such example. Khalifa rocked a white pair of his trademark Chuck Taylors alongside a Thom Browne suit at the Grammys last year, showing how well street style can pair with looks from luxury design houses. But streetwear has made some iconic appearances at the film-related awards shows like the Oscars as well.

Pharrell Williams famously surprised fashionistas by wearing shorts with his Lanvin tuxedo at the 2014 Oscars, later switching to his iconic Vivienne Westwood hat and a bold pair of red sneakers for his performance of “Happy” during the show. Seth Rogen repped a futuristic pair of Nike Mags, beloved by sneaker lovers and Back to the Future fans everywhere, at this year’s Academy Awards.

Streetwear has also shown up at other major awards events like the BET Awards. Tracee Ellis Ross, star of TV’s hit show “Black-ish,” kept it traditional with a striking snakeskin gown on the BET Awards red carpet in 2016. But later that evening Ross appeared onstage in a much more current athleisure style—a Vetements hoodie—when it came time to present an award alongside her co-star Anthony Anderson. Pop superstar Rihanna took her look in an entirely different direction at the 2015 BET Awards, turning heads with a gorgeous gold shorts suit.

Although the red carpet tends to be graced most often by luxurious evening gowns and sharply tailored tuxedos, there are intriguing hints of street sensibility to be found. A playful pair of sneakers here, an irreverent take on the tuxedo there, and even full-on streetwear ensembles featuring track suits and hoodies. As streetwear’s influence on fashion deepens, it’ll be exciting to see how designers choose to interpret and re-envision the red carpet look in the future.