Warning: Parameter 2 to qtranxf_postsFilter() expected to be a reference, value given in /home/customer/www/apparelnetwork.it/public_html/wp-includes/class-wp-hook.php on line 308
 Origins of Street Wear and Urban Wear | Custom Apparel

The origins of urban wear and street wear can both be traced back to the United States of the late 70’s and early 80’s, each finding similar influences though originating separately on opposite coasts. While urban wear gained popularity with the rise of Hip Hop culture on the streets of New York, street wear was taking off on the sandy shores of Laguna Beach with the surfer (and subsequently, skateboarder) movements. 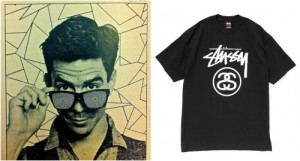 Shawn Stussy is considered the founding father of street wear, and he really had no peers. As a local surfboard shaper in Laguna Beach, Stussy began transferring his logo from his surfboards to T-shirts in the 1980’s. The enthusiasm that met his designs provided him with an opportunity to expand the business from California to the rest of the US, and eventually to the rest of the world:

Meetings with future streetwear taste-makers in Japan and Italy aided in the cementing of “streetwear” as an international phenomenon in both fashion and culture.

Stussy’s flagship store in New York’s SoHo and the popularization of street wear through skateboarding videos that often featured this apparel continued to send waves through the international fashion community. By the time Japanese designer and music producer Nigo founded A Bathing Ape (aka BAPE) in 1993, the street wear movement was already a key influencer on the trends and culture of the coming new millennium. 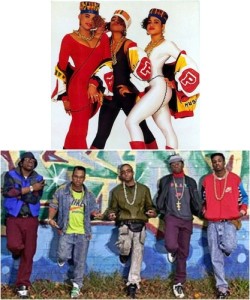 While Stussy was printing his logo on tee shirts in Cali, back East the growing popularity of the Hip Hop movement was planting the seeds of what would become known as urban wear. Teenagers who listened to the music wanted to dress like their favorite artists, hence, the growing sales of bucket hats and track shoes that can be attributed to LL Cool J and Run-DMC. When the late 80’s saw the rise to stardom of Salt N Pepa and Kurtis Blow, heavy gold chains and earrings were incorporated and accessories became and important aspect of the urban wear look.

With the rise of the “Gangsta Rap” subgenre, urban wear underwent a change from a highly stylized looks to something reflecting more of what every day NYC people were wearing on the street: baggy pants, sideways baseball caps, and t-shirts or sports jerseys became staples of the urban wear movement. Hip Hop artists also started classing it up by wearing double-breasted suits and dress shoes. This versatile style led the way for urban wear to make into fashion’s mainstream in the early 2000’s. While many have contributed, one man that can be given special credit for facilitating the transition of urban wear from the street to the mainstream is Sean Combs. Combs had been a trendsetter both within and outside of Hip Hop culture, and blazed the trail that Russell Simmons’ Phat Farm and Jay-Z’s Rocawear would cement urban wear’s prominence in the fashion world.